There is some confusion regarding Olu (ඕලු), Nelum (නෙලුම්), and Manel (මානෙල්) flowers and its English names.  To be honest I am not  sure I have got it 100% right, so open to correction.

The confusion is because Sinhala and English do not match one to one.
A very good example is Honey and Pani (පැණි) is considered equivalent.
Pani පැණි is Syrup in Sinhala.  Honey is  Mi Pani මි පැණි (i.e. Bee Syrup),  Coconut Syrup is Pol Pani පොල් පැණි (i.e. coconut syrup) and medicine syrups beheth pani බෙහෙත් පැණි i.e. medicine syrup

It is a Lily and the National Flower of Sri Lanka.   Though a Lily it is also called blue lotus*, star lotus In Sri Lanka, this plant usually grows in buffalo ponds and natural wetlands. Its beautiful aquatic flower has been mentioned in Sanskrit, Pali, and Sinhala literary works since ancient times under the names kuvalaya, indhīwara, niluppala, nilothpala, and nilupul as a symbol of virtue, discipline, and purity. Buddhist lore in Sri Lanka claims that this flower was one of the 108 auspicious signs found on Prince Siddhartha's footprint. It is said that when Buddha died, lotus flowers blossomed everywhere he had walked in his lifetime.

For you eternal children, a reminder, Tintin and the Blue Lotus.

Known as just Lotus or Indian lotus or sacred lotus.  Just to confuse the naming, it is also called water Lily and confused with water lilies of genus Nymphae.

"Nelumbo" is derived from the Sinhalese word Nelum.

The roots of lotus are planted in the soil of the pond or river bottom, while the leaves float on the water's surface or are held well above it. The flowers are usually found on thick stems rising several centimeters above the leaves.

An individual lotus can live for over a thousand years and has the rare ability to revive into activity after stasis. In 1994, a seed from a sacred lotus, dated at roughly 1,300 years old ± 270 years, was successfully germinated.

In Sri Lanka (and other countries) the yams are eaten as curries.

This is a Lily, i.e in the family Nymphae.  Obviously to confuse everyone, it is called White Lotus or Egyptian Lotus.

Lily pads which float on the water, and blossoms which rise above the water.

In Sri Lanka (and other countries) the yams are eaten as curries. The young fruits are sometimes consumed as a salad (not SL as far as I know). The fresh seeds, white color taste like almonds.  The dried seeds are cooked like a rice.  To cook the seeds, one must either soak it for a day before boiling or cook it in a pressure cooker. Olu haal kandha (Olu rice porridge) is a healthy and wholesome preparation from ground olu seeds and is generally consumed for breakfast.

A short and sweet description of differences 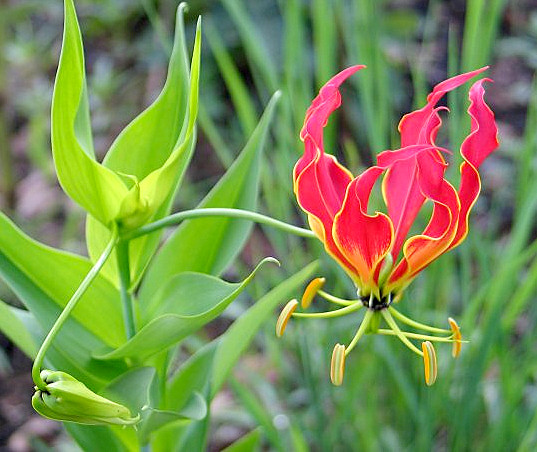 Flame lily, Sinhala Niyangala, (නියඟලා) Extremely poisonous and beautiful.
Had a term like, Wifes Friend in Sinhala. Cook the yam with potatoes and give the husband to get rid of him. Luckily hard to find, so would have be really long premeditated murder.

It is also the national flower of Tamil Eelam, and as such was displayed during Maaveerar Day and the state flower of Indian state of Tamil Nadu (Tamil: senganthal (செங்காந்தள்) or kanvali kizhangu (கண்வலிக்கிழங்கு)).

Research* shows that poisoning mimics infection, so poisoning is not suspected.
Research paper cause was found because the patient finally said he had consumed with the intention of committing suicide.

It also takes 10-12 hours for effects to be seem. The longer a poison takes, the better for the poisoner. i.e. A wider range of potential poisoner suspects.