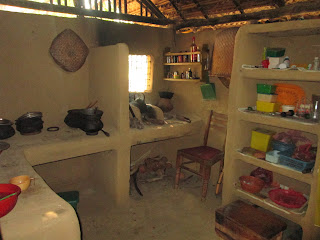 This is a great kitchen made completely with Earth (matti in Sinhala), Not only is it eye catching it is cost effective and very functional.  The kitchen was built by Mr. Dayananda and his wife Sumana by themselves. Mr. Dayananda's wife runs a medium scale plant nursery out in Wanathavillu (on the old Mannar Puttalam road). You may notice that Mr Dayananda is using one of the two or three many efficient ways of cooking with firewood (clay 1950-1978),
a) The double clay stove (CEB Two-pot Stove or the Clay Sarvodaya Version.

b) Rocket Stoves:  Downside the wood needs to be chopped into small pieces. I have not seen one in SL. Does not mean there are none around.
We/I use the double stove, readily available all over the country for around 150-250 LKR. It really cuts down on the firewood use and can have two pots being cooked at the same time. Unhappily I rarely see households using the double stove in this part of the country. The women walk half or more kilometer (depending on economic status) and gather firewood even though this area borders jungle. Thats because the village proper, is urban in the sense there are very few trees/firewood within the village.  Some villagers have have even commented after seeing the double clay stove why I bother. Yes some of those houses will have 50K sound setup or 30K flat screen TV, but not a 150-250 LKR stove that will cut down on firewood usage. 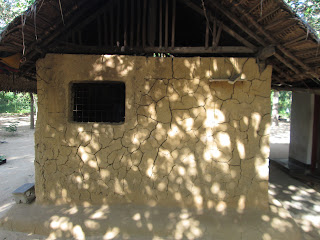 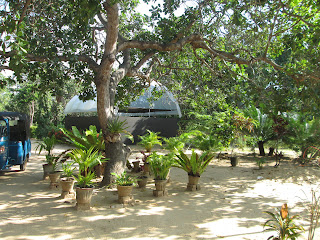 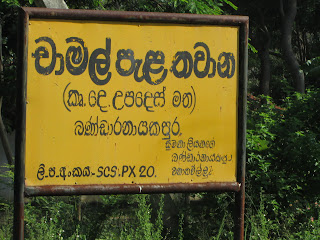 Email ThisBlogThis!Share to TwitterShare to FacebookShare to Pinterest
Labels: Stuff with Earth, www.wilpattuHouse.com

Nasty Guests: Will Meacock and Stephanie

The reason for this post was because I was unable to name the guest who made some really bad comments on booking dot com.  I generally dont bother to answer negative comments about facilities, cleanliness.  WilpattuHouse is a budget location (USD 20 for a room).  It is just a little above camping, with attached toilets.  Sometimes expectations are above the the price.

What really annoyed me was the
a) the damage done to the sheets and bathroom
b) cancelling a pre booked safari tour
c) eating the ordered meal for the safari
d) not paying for b) and c) .

Thats without paying for the food he ate or even bothering to ask about the cancelled safari tour.
Will Meacock is NOT quite the English Gentleman he pretends to be, British yes, non of the courtesy and gentlemanly manner of the English

Then Will Meacock goes on to review with a 3.3 rating.


Beds terrible, constantly barking dogs and very claustrophobic rooms. Showers were so basic. The place should either stop functioning or do a major clean up

We had guests that were just nasty.  Will Meacock and Stephanie Kaldewey and their two children.

The children had vomited all over the bed sheets and mattresses.  Apparently from  food (cream pasta from previous hotel). Not a word about it before they left.

At Wilpattu House we expect all guests to sit and eat together. Will and Stephanie and children did sit down with others.  Two very young women (less than 25) from the UK and a family fromDenmark (two children around 12 years old)

Will and Stephanie were quite aloof (maybe arrogant).  They did often drop that they were doctors in the UK.  Stephanie (Kaldewey) had an accent, and I asked what was the accent, she said she was German.  Not a word that she was Jewish.
Will Meacock was trying to pass of as English.  OK he is British.   But he is of Jewish origin.