Some of the Photos sent by Samuel & Isabelle Metaux taken on their Dolphin watch Boat ride and Wilpattu Safari.  It was a wet Jannuary, but Samuel and Isabelle we smiling all the way. 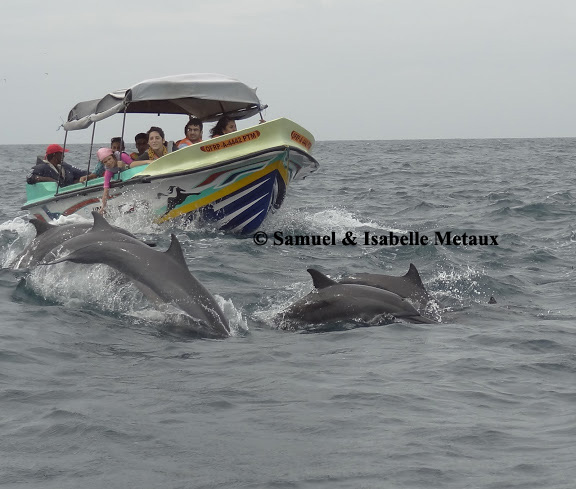 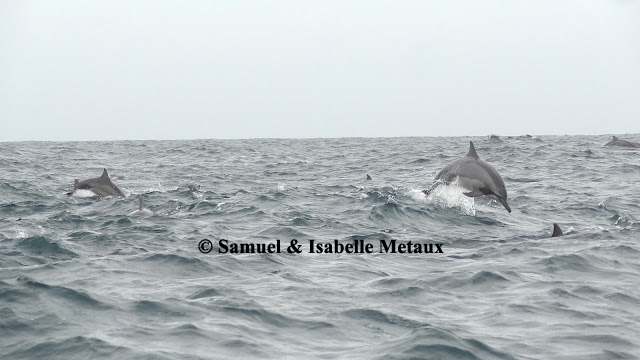 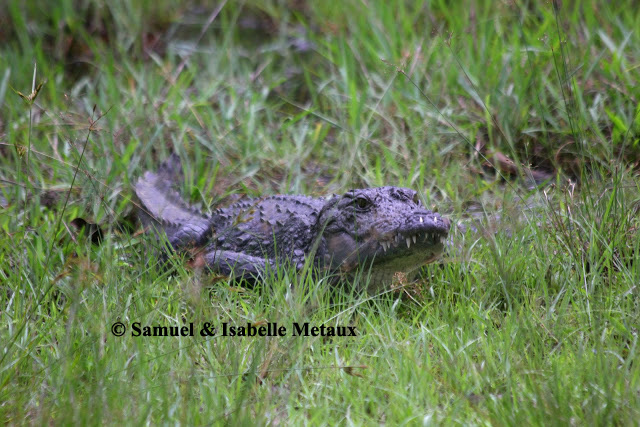 Places to Stay in Mullaitivu (reasonable).
(Also see how to cross Pulmuddai/Kokilai/Kokillai Lagoon)


Mullativu center there is a Three Starts Lodge on the third or fourth floor of the highest building. Very simple, but extremly cheap.   http://goo.gl/maps/onZfs

Green Lodge on the Beach
10 km South of Mullaitivu, on the Beach, Green Lodge.  Its just past Catholic Church on East/Left Sea Side 10 km south of Mullativu.  Sign says Green Lodge.  Go straight down the road. Most locals dont know/want to give info.
Green Lodge is run by the Army. Nice chalet like place (see photo). Also a couple of round cottages with bunk beds and outside shared toilet. No electric, generator runs till 11pm.   Speak to a Ranker (i.e. stars on shoulder) to get a contact number.

This place is a little hard to find, and no permanent contact number. Anyone in the know suggest that this gets fixed (a solar powered CDMA phone maybe).

Comments from some visitors to whom we suggested the place.


Once again many thanks for your suggestions and advice about cycling here in Sri Lanka.

We cycled through Mullaittivu and asked various army personnel as to the whereabouts of the Army Hotel. Unfortunately no one spoke English so we weren't sure if we were making sense or not, but we were waved in a northwards direction. Eventually we enquired at a local government establishment where someone spoke English and directed us about 500m up the road. When we enquired there was no room. For future reference it's the right hand turn on the T junction of the North side of the 035 road.

There was a newish lodge in the main High Street, but a Swiss Cycling couple who we had briefly met earlier said it was closed. We took them at their word and didn't investigate further.

We carried on down the coast to find the Green Jackets lodge you had mentioned, the Swiss couple were in front of us, they were faster on a Tandem. We found the road on the left indicating Green Jackets resort and turned down an unsealed road, only to find the swiss couple coming back the other way saying that this too was closed and that no one was there.

They decided to carry on down the coast and see what turned up. We called in at the nearest army garrison and asked a soldier on sentry duty about the Green Jackets resort. We managed to communicate somehow and he phoned his superior who spoke to us on the phone and booked us in.

We returned back down the road to the Resort and a couple of soldiers were waiting for us. We were the only ones there, but it was a very nice setting, and they cooked us a lovely dinner.


After 80 km we saw a sign "Green jackets resort". At the end of a dirt road we found some bungalows on a nice beach. The place was empty but after some shouting, 3 young soldiers appeared. They had to call their boss at the camp to ask if we could stay there. The boss said, only accommodation, no food. Karin asked to see their kitchen and after some difficult conversation it was understood that we should give them some money to buy all that was needed for string hopper and curry and that we could buy a fish from the men who where pulling their big net at the beach.

From Blog in Dutch (Google Translate). Unhappily no photos of Green Lodge

Along the way we try to check whether we keep driving, but it was soon clear that no one here understands English. We cycle through beautiful surroundings with every kilometer an army post. This is clearly occupied territory since the war ended six years ago. The further we drive away from Trinco, the less traffic and people are not accustomed whites. They are timid, but when we sway appears the broad smile that we have seen anywhere in this country.

On the lagoon is looking for a boat that will transfer us only with sign language.Across the road is the equally beautiful. It starts to rain, but no tropical rain, there is best for cycling. Eventually we find accomodation at an army base on the beach. The men do not understand us, and the only word I understand them is the boss. "The symbol for phone to my ear, I ask to call 'boss' and fortunately the English. First he wants to know where we come from ... if you come from the wrong country, maybe you can not stay here? We arrange an overnight stay, but "only accomodation." How do we get to eat then? I try to explain that I want to see the kitchen, I can go shopping and cook, but then says one of the men he's cook. With our money, they want to go shopping for string hoppers with curry and fish. If Michel them suggesting that around here no fish for sale, the man pointing to the fishermen in the sea. They will soon buy the fish, he's still swimming.

This was meant to be part of a post of travel by tuk-tuk along the East Coast, from Paranthan-Mullativu-Kokilai-Pulmoddai-Trincomalee.  However, there seems to be minimal information about how to get across Kokillai Lagoon. (See Places to stay around Mullativu)

For those who are thinking of traveling by bus/bicycle/motorbike along the East coast of Sri Lanka from Jaffna-Paranthan-Kilinochi-Mullaitivu - Trincomallee - Batticoloa -Arugam Bay, the lagoon at Pulmuddai/Kokilai should not be a deterrent.

Just get to the fishing village at either Pulmuddai or Kokilai and arrange with a fisher to take you across. Its about LKR 500 for a person, LKR 1000 or so for a small motor bike and some where in between for a cyclist.  At times there is a boat that can take a tuk-tuk across the lagoon.

If you are traveling in vehicles larger than a tuk-tuk there is detour (42 km ) around the Kokkilai Lagoon.  It should be motorable even by a small car during the dry season.  During the rainy season, as some sections of the road are gravel, small cars might not be able to go over potential mud holes.

For detailed instructions for detour by vehicle see
http://www.wilpattuhouse.com/TravelTips/Crossing-Kokilai-Pulmuddai.html 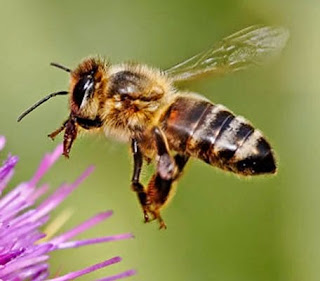 Honeybee Colonies are collapsing world wide. Now that might not seem a big deal for most people. Thats probably because they are unaware that most fruits are pollinated by bees.   In certain parts of china fruit flowers have to be hand pollinated because of the scarcity of bees.

Now it seems like use of  RoundUp (Glyphosate) can cause collapse of honey bee colonies.  One research found that typical amounts of Glyphosate added to agricultural fields could reduce short term memory and learning ability and nectar appetite of honey bees.  So the glyphosate reduces colony efficiency resulting ultimately in colony collapse.

Of course EPA/Monsanto says RoundUp is harmless for bees and have research studies to prove it. However, when reading the paper, one realizes that it focuses on mortality. That is the study focused on the effect of RoundUp (Glyphosate) acting as a poison and killing bees.  There was no study on the long term effects of RoundUp (Glyphosate) on bees.

An Aside on Sri Lanka


Of the four honeybee species of Sri Lanka, only one-the mee massa (Apis cerana)-is suitable for domestication, because it builds its hive in enclosed spaces, which makes it suitable for beekeeping. -

The bambara and the danduwel massa (Apis florea), small, red bees, build their hives in open spaces such as on trees or high up on buildings. The fourth species, the kano mee, a small stingless honeybee species, produces small quantities of honey. 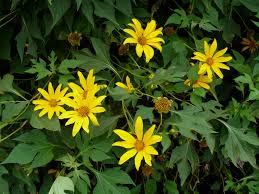 Found out a couple of months ago from a visitor here that Mexican Sunflower (වල් සුරියකාන්ත) Tithonia Diversifoliais a very good fertilizer. Thanks Anil Ratnayake.

Mexican Sunflower is fast growing, not fast enough here because we would like to use it extensively as soil conditioner and fertilizer. It is a weed and invasive species that originated from Central America.
Anecdote:  My sister has a Rambutan plant that has barely grown in two years. Probably because the garden has been filled with gravel/gritty soil (බොරලු). About two-three months ago she had planted a Mexican sunflower next to a Rambutan plant.  This was before we knew about the soil conditioning properties. Anyway within the last two months the Rambutan plat has grown by about 2 feet.

Travel Tip: Do your Snorkeling etc Before Mid Day

In Sri Lanka, if you plan to snorkel, whale/dolphin watch do it as early as possible. Preferably before mid day, be it East or West Coast.  Thats because the tide comes in around mid day and the sea will start to get rougher.  If your snorkeling in relatively shallow water, the sand will get disturbed and your visibility will become low.

In most other countries the tide will change every day and the height too (3-12 feet on average).  So before you go out to sea, need to check tide chart for low and high tide times.

The reason is that Sri Lanka is one of a few tidal node or amphidromic point. That is center point around which the tides rotate. Think of a string you whirl around while moving it very slightly up and down with your hand.  There will be almost no up down (vertical) movement near your hand.  At the end of the sting there is a big up down (vertical) movement.   The amphidromic point will be your hand, the center of rotation.

For more technical/scientific explanation of amphidromic point see here.
Posted by sbarrkum at 6/11/2015 03:30:00 PM No comments: