This blog post is long reply to a good friends questions (in bold italics).

First: Productivity, Growth.  That is a concept that is used by the rentier classes to maximize profits.  Pay the least and and get the most.  How, does that benefit the avg Joe.  Standard answer is cheaper goods, and you know that does not happen.  (See Box Below)

"in 1973 number of vehicles in Yala were less than 100,trackers were more respected, poaching was minimal, buffer zones had no settlements"

Sri Lanka population was 13.5 million. The country was poor and could not pay its debts.
Because the price of rubber had collapsed (synthetic rubber production). Almost the whole country (including our family, I was 14) had to stay in long lines to get bread, rice.  Long means long. 4am to 6am to get 2 loaves moldy bread.  Sisters and I took turn to stay on the lines.

After 2010, population is 21 million. There is peace and many people (including rural/small town) have disposable income and can do affordable trips, specially in large groups.  Yes, they will throw garbage out of the jeep, drinking and Yala and in in other vacation areas.  Sounds familiar, right, you get the same complaints about behavior of low income people in the US national parks, Beaches etc.

"land in areas not the best for successful cultivation and their usage was no better than slash & burn"
I have no idea where they do slash and burn these days.  This area where I live was one of the poorest because it was border country during the war.  People here had no option but to hunt in Wilpattu to have food on the table.  The Army and LTTE to hunted to have food.   However, when I came in 2012 there was no slash and burn.

"When Mrs, B broke up the estates down to 50 acres,how come these newly acquired land not used for land reform, productive agricultural areas?"

There was no way the hill country estates were going to be given en masse to the Estate Tamils. Racism and Political suicide. So the hill country Tea estates became  Govt/State owned, and run by either the Govt entity, Janawasama or leased to Private companies like Mackwoods.  The land is still owned by the state.

There were exceptions.  An estate in Katul Oya/Gomara, near Knuckles Range .  1/2 acre was given to the workers in lieu of pay.  Beautiful area, a small plain adjoing the Knuckles Reserve. I tried to buy 4 adjoining plots, too expensive for me.

In the south (Deniyaya, Hiniduma etc)  many of the Tea Estates were broken up and 2 acres was given to villagers.  I personally know two families.  They make about 1-2 lakhs/month.  However, they have to do all the work themselves.  No hired labor on avg or the gains are gone.

70% of our tea comes from small holdings.

To quote from   https://www.ilo.org/wcmsp5/groups/public/---asia/---ro-bangkok/---ilo-colombo/documents/publication/wcms_654641.pdf
"Of this, smallholders, often following a multi-crop model on landholdings of less than ten acres, cultivate about 60 per cent of the total tea land and account for more than 70 per cent of  the  total  production. "
"The smallholder subsector is better off than the corporate plantation sector in terms of productivity. " 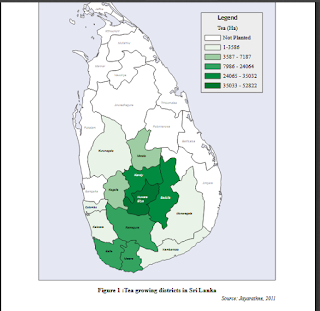 "All that happen was a land grab by the competing elites, old money to new money."

Old money:  Most made their money because they had patronage of the Brits. I hope you have read "Nobodies to Somebodies",  Big money from selling alchol, legal monopoly of a drug, including the Senanayakes . Thats a story in itself.  Old money is also Land given by the Brits for brown nosing.

Some of the old money has changed with the times and jumped on the band wagon. One thing for sure, the new money has to spread the money more to all.

"State run enterprises by politicians who lacked business acumen had no business taking over profitable enterprises!

Ha, this comes to productivity.  State run businesses are not profitable because they are over staffed.  But the pay goes to Sri Lankans, may be backside warmers. welfare in another way.  Can privatize and sell and the profits go overseas. Offshoring of US manufactiring ring a bell. (see box again)

Land Ownership and Land Reform
In the US, there are almost no small family farms left. All taken over by big agri business.  The people have moved to large cities to work in Factories.  Now that manufacturing has been offshored, the mid west rust belt has become one large meth and fentanyl fest.

In the UK, there were the Inclosure/Enclosure acts that drove the rural working class out of the countryside.  It was cheap labor for the factories of the biggest richest empire at that time.  However. Life for those in the factory cities was horrible. Read Dickens etc.
See http://www.thelandmagazine.org.uk/articles/short-history-enclosure-britain

Even today half of England is owned by less than 1% of the population.  Average Joe in the UK less than 10%. (https://www.theguardian.com/money/2019/apr/17/who-owns-england-thousand-secret-landowners-author)

Thank goodness in Sri Lanka we had land reform and ceilings on land ownership.  So no large migrations to cities and slums.


Arrack/Tavern renting
Legalized drug dealing monopoly enforced by the Jack boot.  Prior to the English the Sri Lankan Tamil and Sinhalese tapped their toddy drank it, shared it or sold some. Never was big or even small scale business.  Too much work for lotus eaters.

The English, passed laws that a family could keep only two bottles of tapped toddy.  The rest had to be given to the Toddy Tavern (and later distilleries) at a fixed price set by the English.  They had special police, called Excise police to enforce the laws.  The taverns were rented off to Sinhalese families, prominent among them the Senanayskes, de Soysas for example.
http://www.sundaytimes.lk/181111/plus/don-spater-senanayake-and-the-temperance-movement-319728.html