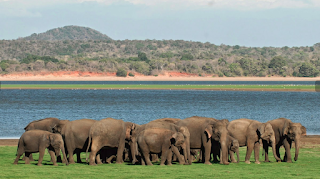 The Gathering (of elephants) in Minneriya or Kaudulla National park are considered one of the great wild life spectacles of the world, comparable to the Great migration in Serengeti.  The gathering of over 300 elephants in Minneriya occurs during the dry season of May-Sep.

The gathering is however a result of  environmental engineering two thousand years ago.  The 87 km (54 miles) Elahara canal was built by King Vasabha (67–111 AD).   King Mahasen (277-304 AD) built Minneriya Reservoir and connected it to the Elahara Canal. Currently Elahara canal starts from Amban river near Elahara and carries water to large reservoirs in north, Minneriya, Girithale, Kaudulla (Tissavadamanaka of Mahasen) and Kantalai reservoirs.
.

Its not just the Gathering at Minneriya. Sri Lanka has been environmentally re-engineered for over 2,000 years.  The 30,000 odd reservoirs/tanks and associated wetlands have changed the dry zone into oasis of water and wetlands for both animals and humans.

Not only has the environmental engineering changed biodiversity, it has changed social structure. Building and maintenance of village tanks was done by the village community. This resulted in a more egalitarian society, specially compared to the rest of South Asia.

Reservoirs were not built just for irrigation. It was, for example, traditional to build a forest tank in the jungle above the village. That tank, however, was not used to irrigate land: on the contrary, its express purpose was to provide water to wild animals and, hence, to reduce the likelihood that they would descend into the paddy fields and destroy the crops in the search for water (Goldsmith)

Finally:
Sir Emerson Tennent in Ceylon; an Account of the Island Physical, Historical vol 2 considered it to be The Greatest Canal in the Ancient World: (complete pdf: pg 433)


“Excepting the  exaggerated dimensions of Lake Moeris in Central Egypt,and the mysterious " basin of Al Aram' the bursting of whose embankment devastated the Arabian city of Mareb, no similar constructions formed by any race, either ancient or modern, exceed in colossal magnitude the stupendous tanks of Ceylon. The reservoir of Koh-rud at Ispahan, the artificial lake of Ajmeer, or the tank of Hyder, in Mysore, can no more be compared in extent or grandeur with Kala-weva, or Padivil-colom than the conduits of Hezekiah, the kanats of the Persians, or the subterranean water-courses of Peru can vie with the Ellahara canal, which probably connected the lake of Mineri and the "Sea of Prakarama" with the Amban-ganga river.”